Girija Prasad Koirala, the grand old man of Nepali politics who is once again its new premier, is part of a family dynasty that has fought for democracy in Nepal for more than 50 years. 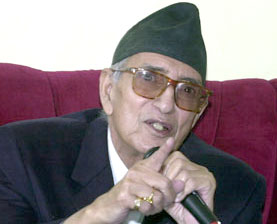 Koirala has led the country through some of its biggest upheavals and been implicated in the feuding and claims of corruption that have frequently rocked public life.

Koirala, 84, reportedly an unwilling candidate, takes charge of the job for the fourth time after a series of premierships marked by a deadly Maoist insurgency and a palace massacre.

One of three brothers to hold the top job, he was in charge at the time of the mountainous nation's most notorious upset when 10 members of the royal family, including the king and queen, were shot dead during the crown prince's drunken rampage.

The position of Koirala, the leader of the kingdom's largest party the Nepali Congress, was shaky at the time of the massacre and he had nearly resigned over a corruption probe, reports Independent Online.