Its proximity to a desert is about the only thing the Mongolian border town Zamyn Uud has in common with the gambling Mecca of Las Vegas. 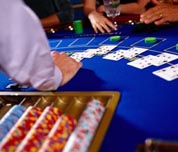 But Mongolian planners and American entrepreneurs hope the tiny town where livestock outnumber people on the main rail link between China and Russia will one day become a major gambling and resort destination.

On Thursday, the government of Mongolia signed a contract that will put a little-known U.S. real estate company, Winwheel Bullion LLC, in charge of building a casino complex, with hotels, a convention center, shopping malls, banks and financial institutions and a modern airport to bring visitors the vast distances needed to reach Zamyn Uud.

Mongolia's ministers of trade and finance and its central bank governor were to be on hand for the signing ceremony at a posh Washington hotel, timed to mark the 800th anniversary of the coronation of Genghis Khan.

"Genghis Khan ruled so much of the world for 150 years," Winwheel chairman Kim Sun-jin said in a phone interview. "This is a good chance to bring down the Great Wall and for China and Mongolia to be commercially integrated."

"The timing is right, too," Kim said.

So far, Winwheel and the Mongolian side are providing no information about financial arrangements for the zone.

It wasn't immediately clear where Winwheel is based, although its Web address which said "under reconstruction" is registered in Mount Vernon, Missouri.

Zamyn Uud, population 8,400 plus 10,372 sheep, cattle and other livestock, whose name in Mongolian means "gateway," is no Las Vegas, reports AP.