President Vladimir Putin called Wednesday for Russia to tap into new energy markets in Asia and accused other nations of trying to hem in Moscow. 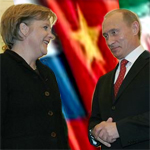 "We frequently get examples of unfair competition on world markets," he said at a meeting of regional governors on Siberian development before his summit with German Chancellor Angela Merkel, which was expected to focus on business ties with Russia's biggest trade partner. "They try to limit us to the North and the South."

Putin's call to seek new oil and gas markets in the East followed similar recommendations from high-ranking officials at the Gazprom state-controlled gas giant and Transneft pipeline company that Russia should diversify its markets away from an over-reliance on Europe.

On Tuesday, during a trip to Greece, U.S. Secretary of State Condoleezza Rice expressed concern that Russia could have a monopoly on natural gas exports to Europe

The energy trade was expected to be high on Putin's agenda with Merkel, as was Iran, with a U.N. Security Council deadline Friday for Tehran to suspend uranium enrichment.

After arriving Wednesday evening in Tomsk, about 2,900 kilometers (1,800 miles) east of Moscow, Merkel met Putin at a Tomsk university.

Both leaders were to preside over a Russian-German business forum on Thursday.

Merkel, accompanied by her ministers and scores of business executives, said the size of the delegation was "a good sign for the state of our relations" as the meeting began at a university library.

Talking to reporters after an hour and a half of talks with Putin focused on energy and economic ties, Merkel said the initial round of discussions had been "very, very intensive and extremely open."

"This shows that both sides want cooperation and want to grow further, it also shows that our partnership has a strategic character," she said, reports AP.