South Korea said Wednesday it will resume limited imports of American beef as early as June and that tests showed U.S. beef is safe, despite the confirmation last month of the United States' third case of mad cow disease. 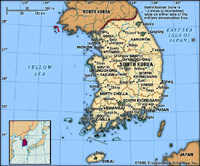 South Korea was the third-largest foreign market for American beef, after Japan and Mexico, when it shut its doors to the product in December 2003 after the U.S. reported its first mad cow case.

However, the Agriculture and Forestry Ministry said Wednesday that recent tests have shown American beef to be safe, and that the latest infected U.S. cow, in the state of Alabama, was born before April 1998, before Washington's anti-mad cow safeguards, implemented in 1997, had time to take effect.

"The imports of American beef could be resumed in June at the earliest," said Kim Chang-seob, chief veterinary officer of South Korea's Agriculture and Forestry Ministry.

The ministry did not provide any details about the tests.

Imports to South Korea will be limited to boneless meat from cattle younger than 30 months old. U.S. officials say the disease has not been found in cows below that age.

In 1997, the U.S. took steps such as banning ground-up cow remains from cattle feed. Scientists believe the illness spreads when farmers feed cattle recycled meat and bones from infected animals.

In January, Seoul had said it planned to resume limited U.S. beef imports by the end of March after reaching an agreement with the U.S. to relax the ban. The resumption was delayed because the infected cow's age hadn't been scientifically confirmed, reports the AP.