Prodi prepares for power, faces first test to his leadership

Center-left leader Romano Prodi prepared Friday for his return to power, shrugging off Premier Silvio Berlusconi's refusal to concede defeat in Italy's election and facing the first dispute within his wide-ranging coalition. 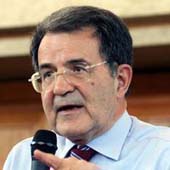 Prodi prepares for power, faces first test to his leadership

U.S. President George W. Bush, a close ally of Berlusconi, telephoned Prodi on Friday to congratulate him on his election victory, Prodi's office said. Bush said he hoped to meet Prodi and "expressed his hope of soon being able to begin working with the new Italian government," a statement from Prodi's office said.

A top court on Wednesday confirmed Prodi's razor-thin victory in the lower house of parliament, but Berlusconi resisted calls from some of his own allies to recognize his rival's victory.

He did allude to a future Prodi government Friday if only to say it was doomed.

"I think theirs will be a parenthesis, an interruption in our path toward a future of development, progress and freedom," the conservative leader and media mogul told supporters in the northeastern city of Trieste.

The squabbling between two center-left allies over who should become speaker of the lower house of parliament posed the first test of Prodi's leadership and renewed questions over the bloc's cohesion.

"It's a test that comes very soon, when we are still far away from the official mandate," wrote financial daily Il Sole 24 Ore. Top newspaper Corriere della Sera described the dispute as an "emblematic mess."

Massimo D'Alema, president of the Democrats of the Left party, and communist leader Fausto Bertinotti are fighting over the speaker's post, the country's third-highest office.

D'Alema says the job should be given to him in recognition of the size of his party, the coalition's largest. Bertinotti had put forth his candidacy weeks ago, and Prodi might be wary of disappointing the ally who toppled his first government years ago, reports AP.