President Jacques Chirac congratulated Romano Prodi on Wednesday for his victory in Italian elections and expressed hope for strengthened ties between the neighboring countries. Chirac "passed his warm and friendly congratulations" to Prodi in a telephone conversation, the president's office said in a statement. 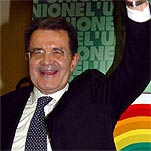 The conservative French president expressed hope that " Italy and France will reinforce their ties and cooperation in the European project," it said. The center-left Prodi emerged the winner after an extremely tight race earlier this week against Prime Minister Silvio Berlusconi, who refused to concede defeat and demanded a recount.

In an editorial in the French daily Le Monde released Wednesday, Prodi criticized the war in Iraq as "unjust and unjustified" and urged a stronger Europe to help "balance" the trans-Atlantic partnership, "It is time that my country rediscovers its traditional role, that it reinforces ties between a strong Europe and the United States . The troubles of the world demand multilateral responses," Prodi wrote. Berlusconi, a close U.S. ally, sent Italian troops to Iraq . Prodi said he would withdraw them and send a civilian contingent to help rebuild the country, reports the AP.