South Korea and Japan made "no progress at all" Friday during initial high-level negotiations aimed at defusing mounting tensions over Tokyo's plan to send survey ships into waters claimed by both countries, a South Korean official said. "There has been no progress at all so far," South Korean Vice Foreign Minister Yu Myung-hwan said after a 90-minute meeting with Japanese Undersecretary for Foreign Affairs Shotaro Yachi, who made an emergency trip to the South Korean capital. 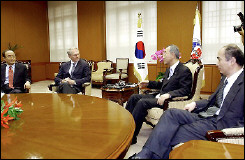 "We talked about our position. Japan talked about its position," Yu said. "We need to talk more. The positions of the two sides are so different ... that we have to talk frankly." Yachi described the atmosphere at the meeting as "severe," according to Japan 's Kyodo News agency.

The diplomats broke after their brief initial meeting for more talks over dinner and may meet again on Saturday, South Korea 's Foreign Ministry said. Japan has reportedly agreed to delay the survey while the talks continue. Its coast guard survey ships had been scheduled to start the study as early as Thursday, but have waited off the coast as tensions flared.

South Korea has dispatched about 20 gunboats to the disputed waters, and has told Japan to stay away. In Seoul , riot police guarded the Japanese Embassy as a group of former special forces commandos burned a Japanese flag and denounced Japan 's survey plan. " Japan has again caught the disease of aggression," one placard said.

The disputed waters surround rocky outcroppings called Dokdo by Koreans and Takeshima in Japan that lie halfway between the countries and are claimed by both. The area, a rich fishing ground, is also believed to have methane hydrate deposits, a potential source of natural gas.

The showdown highlights the rising stakes of rival territorial claims in East Asia , and South Korea 's deep-rooted bitterness over Japan 's 1910-45 colonial rule. South Korea has accepted Yachi's trip to Seoul on the condition that Japan suspend its maritime research plan, and Japan was planning to put the survey on hold, Yonhap and Kyodo reported, citing officials from both countries.

At the same time, Japan warned it would consider any interference with its ships a breach of international law. "We are speaking about survey boats belonging to the Japanese government," Foreign Minister Taro Aso told a parliamentary foreign policy committee Friday. "Any action against them would clearly violate the principles of international law."

Japan maintains the survey is needed to match a South Korean effort to fully map the sea floor and propose its own names for underwater formations such as basins and ridges. Seoul has long opposed the international acceptance of the name Sea of Japan for the body of water between the two countries, considering it a colonial vestige. Seoul prefers the name East Sea .

Aso said there would be "no need for us to conduct a survey" if South Korea drops it name-change proposal, which would be submitted in June at an international sea-mapping conference in Germany . South Korea 's Foreign Ministry rejected such a compromise.

"Basically, our position is that we will submit names," said Foreign Ministry spokesman Choo Kyu-ho. "We believe that it is our just right, to register names and make efforts for new names through registration." The South Korean patrol vessels dispatched to the area are conducting exercises but not seizure drills in the waters near the island, said South Korean Coast Guard official Jang Soo-pyo.

Park Geun-hye, chairwoman of South Korea 's main opposition Grand National Party, urged her government to take a "hard-line" response," saying the territorial dispute was a matter of sovereignty. "I think there should be no concession on this issue because we have to safeguard our territory no matter what," she said. The two countries are also at odds over Japanese Prime Minister Junichiro Koizumi's repeated visits to a war shrine that critics, including Seoul , consider a glorification of Japan 's imperialist past, reports the AP.