Evacuations continued Friday in flooded Bulgarian towns along the swollen Danube River , as experts predicted waters would begin to recede next week. In the northwestern city of Vidin , the Danube level decreased by 2 centimeters (less than an inch) overnight, but people continued to leave riverside neighborhoods. Some 2,000 people have been evacuated, and dozens of homes were under water, state news agency BTA reported. 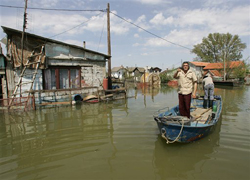 In Nikopol, the Danube rose 5 centimeters (2 inches) to an all-time high of 885 centimeters (29 feet), forcing more evacuations, the civil defense agency said. The city hall and most houses in the riverside area were submerged. The four temporary dikes protecting the town of Lom have been seriously weakened by the long exposure to high water levels, local authorities said. Water was oozing through the earthen barriers, threatening to flood the nearby railway route.

Further downstream, in the city of Ruse , the Danube completely submerged the western port, forcing its closure. Water levels were expected to begin receding next week, the government agency for research and maintenance of the Danube said. Army troops, workers and volunteers continued, however, to bolster embankments and patch damaged dikes.

For weeks, heavy rains and melting snow have caused rivers to overflow their banks in Bulgaria , Romania and Serbia-Montenegro, causing widespread flooding in many communities. In Romania , U.S. Ambassador Nicholas Taubman said the United States would donate US$250,000 (202,000) to help some 6,000 people left homeless by the floods. The money is to be allocated through the U.S Agency for International Development, according to an embassy statement, reports the AP.