Merkel and Putin to meet in Siberia on Iran discussing

German Chancellor Angela Merkel and Russian President Vladimir Putin will meet in Siberia next week to discuss the Iranian nuclear program and other issues, the German government said Wednesday. Merkel, Putin and several members of their governments will meet April 26-27 in the city of Tomsk for regular consultations, Merkel spokesman Thomas Steg said. 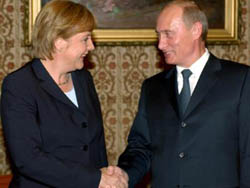 Merkel and Putin to meet in Siberia on Iran discussing

He said Iran would likely be at the top of the agenda when the two leaders meet. Germany , along with France and Britain , has played a leading role in European efforts to address concerns over Iran 's nuclear program. "The interest of the (German) government remains that we do everything so that a diplomatic solution of this issue is achieved, with the international community continuing to be united and exerting pressure," Steg said. German and Russian industry representatives also will travel to Tomsk , Steg said. He declined to give details, reports the AP.