The U.S. envoy to talks on the future status of Kosovo was to visit Tirana on Wednesday for meetings with top Albanian officials, at the end of a Balkan tour. During his two-day visit, Frank Wisner will meet with Albanian Prime Minister Sali Berisha and Foreign Minister Besnik Mustafaj, as well as with politicians, media and representatives of non-governmental organizations to discuss the Kosovo talks, the U.S. Embassy in Tirana said in a statement. 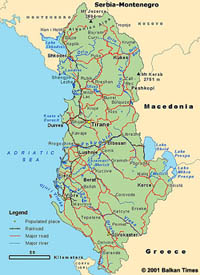 Wisner has visited Kosovo , Serbia - Montenegro , Macedonia and Greece as part of his Balkan tour, and is scheduled to head to Western Europe , the embassy said, but did not specify which countries he would visit.

The U.N.-mediated talks on Kosovo's future, which began in February, aim at finding a settlement by the end of the year. The province, which is formally part of Serbia-Montenegro, has been under U.N. administration since mid-1999, when NATO launched air strikes to stop a crackdown by Serb forces on separatist ethnic Albanians. The province's ethnic Albanian majority insists on independence, while its Serb minority and Serbia want Belgrade to maintain some control over Kosovo, reports the AP.