A Moscow court found a Yukos lawyer guilty Wednesday of embezzling 8 billion rubles (US$300 million; 240 million), Russian news agencies reported, the latest ruling in a politically charged campaign by prosecutors and tax officials that has broken up Yukos and landed its former leaders in prison. Prosecutors have demanded a nine-year prison sentence for Svetlana Bakhmina, who has been jailed since her December 2004 arrest in connection with an asset-stripping investigation at Yukos' Tomskneft subsidiary. 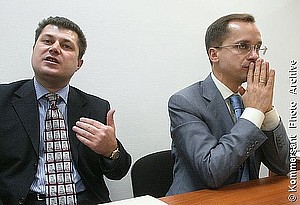 Bakhmina, whose jailing has prompted criticism of the authorities because she has two young sons, has pleaded innocent and also said any actions she took were at the behest of superiors, according to Russian media reports.

Her lawyers say that if convicted, she should be released from custody under an amnesty signed five years ago that they say applies to women who have small children and are sentenced to less than 10 years in prison, Ekho Moskvy radio reported. The Russian prosecutor general's office declined to comment on that possibility.

The requested sentence is the same length as those initially handed down last May in the trial of former Yukos CEO Mikhail Khodorkovsky and his associate Platon Lebedev on fraud and tax evasion charges. Both later had the sentences reduced to eight years.

The trials of Yukos officials and multibillion-dollar tax claims against the company have been widely seen as a campaign by President Vladimir Putin's Kremlin to punish Khodorkovsky's financial and political clout and tighten the state's grip over the lucrative oil industry.

Yukos has been dismantled and its main production unit, Yuganskneftegaz, is now under state control. Khodorkovsky is serving his sentence at a prison in a remote corner of Siberia near the Chinese border, where his lawyers say another inmate slashed him in the face while he slept last week.

The head of the Federal Prisons Service said Tuesday that Khodorkovsky wold be placed in solitary confinement to protect him following the slashing incident, but the service said Wednesday that he had been moved to an area where he would be alone, not a punitive isolation cell, the Interfax news agency reported, reports the AP.