Secretary-General Kofi Annan urged Syria to accept the "outstretched hand" of a united Lebanon and move quickly to determine the border between both countries and establish an embassy in Beirut to help reaffirm Lebanon 's sovereignty and political independence. Lebanon 's journey into a new era in its history following last year's departure of Syrian troops is fragile, though the country has made "further significant progress" in the last six months, Annan said in a report obtained late Tuesday by The Associated Press. 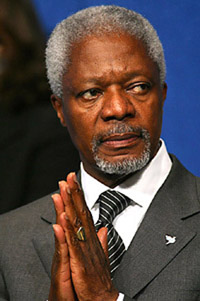 But he warned that Lebanon will not regain full sovereignty and independence until Hezbollah and other Lebanese and non-Lebanese militias that operate freely in the country give up their arms and come under government control. Annan's report focuses on implementation of a Security Council resolution adopted in September 2004 that called for the withdrawal of all foreign forces from Lebanon , the disbanding and disarmament of all militias, and the extension of government authority throughout the country.

The assassination of former Lebanese Prime Minister Rafik Hariri in February 2005 soon after its adoption proved to be a turning point in Lebanon 's recent history. It led to Syria 's withdrawal of its troops from Lebanon , ending a 29-year presence in the country, and parliamentary elections in which anti-Syrian legislators gained the majority. Annan noted that during the past six months "a tense bilateral relationship has prevailed between Syria and Lebanon ," marked by mutual accusations in public statements, including against political leaders.

But he called the National Dialogue in Lebanon initiated by Parliament Speaker Nabih Berri "a truly historic and unprecedented event" that has brought Lebanese together for the first time to talk frankly about issues that only a few months ago were considered taboo. With the unanimous agreement in the National Dialogue to work constructively with Syria , "a united Lebanon has offered an outstretched hand to Syria ," the secretary-general said.

"I call on Syria to accept this offer and undertake measures, in particular, to establish embassies and delineate the border between Syria and Lebanon ," Annan said. Diplomatic representation in other countries and clearly marked borders "are basic indicators and intrinsic elements of the sovereignty, territorial integrity and political independence of any state," the secretary-general said.

An agreement on borders would settle the contentious issue of the Chebaa Farms area on the foothills of Mount Hermon , which was captured by Israel when its forces seized Syria 's Golan Heights in the 1967 Middle East war, he said. The United Nations determined that the area is Syrian, and that Syria and Israel should negotiate its fate. But Lebanon claims the Chebaa Farms a claim backed by Syria and Hezbollah continues to fight over the disputed land, arguing that Israel 's occupation justifies its "resistance."

The Lebanese have emphasized their willingness to reach an agreement on Chebaa Farms, Annan said. "I expect Syria 's cooperation on this matter," he added. A border agreement could also help curb the illegal transfer of arms and other goods, which Annan said was now difficult because Lebanese authorities say a number of border villages straddle both Lebanon and Syria .

He also called an agreement reached in the National Dialogue calling for the disarming of Palestinian militias outside Palestinian refugee camps within six months "tremendously significant." "There is an urgent need now to build on the existing momentum and turn the agreements reached into practical reality," Annan stressed. "To this end, dialogue and partnership is necessary between the Lebanese and Syria , and cooperation by all sides, is indispensable", reports the AP.