The bodies of five slain Tamil civilians were found in northern Sri Lanka Wednesday, while two sailors were wounded when an anti-personnel mine exploded, police and navy officials said. The bodies of the civilians were recovered in Tamil majority Jaffna , 300 kilometers (185 miles) north of the capital, Colombo , area police officer W.G. Ranasinghe said. 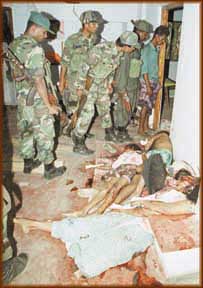 They had left their homes Tuesday evening in a motorized three-wheeler taxi for a nearby village and their bodies were discovered with gunshot wounds on Wednesday, he said. The identity of the assailants and the motive behind the killings was not immediately known. In a separate incident, two sailors were wounded when an anti-personnel mine exploded in northwestern Mannar district Wednesday, navy spokesman, Commander, D.K.P. Dassanayake said.

The sailors were filling a water truck when the mine exploded, Dassanayake. "The information we have says two of our men were wounded," Dassanayake said. Another explosion hit the northern town of Vavuniya hours later, but no details were immediately available, military spokesman Brig. Prasad Samarasinghe said.

Vavuniya is 210 kilometers (130 miles) north of the capital, Colombo and is the last garrison town before rebel territory starts. The incidents come as Norway 's peace envoy Jon Hanssen-Bauer met Sri Lanka 's Prime Minister Ratnasiri Wickramanayake in an effort to save an Oslo-brokered cease-fire that has come under threat because of frequent violence, reports the AP.