A bomb exploded at an eastern Baghdad cafe frequented by policemen Tuesday, killing at least seven people and wounding more than 20, police said. The bomb, originally believed to have been placed under a car, was actually hidden underneath the couch at the entrance to the cafe in the neighborhood of Suleikh, police Capt. Ali al-Obeidi said. Three policemen were among those killed, and the rest were civilians, he said. 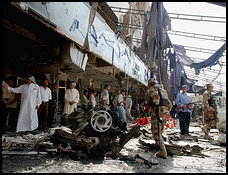 Tables and chairs were thrown out of the building in the blast, and glass windows of nearby shops were broken. A roadside bombing in western Baghdad missed a police patrol, wounding a civilian driver instead, police said. In the Dora district of southern Baghdad , police discovered two bodies, both shot in the head. Twelve other bodies were found in the same neighborhood on Monday. In a drive-by shooting, assailants gunned down a police officer walking near his home in the southern city of Basra , police said, reports the AP.