Six police injured in riots after elections on Solomon Islands 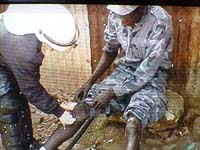 Six police injured in riots after elections on Solomon Islands

Howard said he was prepared to send more forces to the troubled country if necessary. " Australia has made a very strong long-term commitment to the future of Solomon Islands ," he told reporters in Canberra . "At this stage there does not appear to be a need for further forces although if there is they will be sent."

Six police officer were injured by the stone-throwing protesters, with one suffering a broken jaw, Castles said. "We have three mobs in town ... each up to 300 in strength (including) one near the prime minister's residence and another still in the central business district," he said.

More than 280 police from Australia and New Zealand have been in the Solomon Islands since 2003 helping the local force restore law and order in the chain of islands 3,840 kilometers (2,385 miles) northeast of New Zealand 's capital, Wellington . The foreign force had largely ended violence between rival islanders that had simmered across the Solomon Islands for years, peaking with a coup in 2000.

Howard confirmed that one Australian officer suffered a broken jaw and another a suspected dislocated shoulder. Four others received minor injuries. Castles said Rini was being protected and he added police were satisfied they had the numbers "to monitor and contain these groups."

Earlier, Rini told reporters the protesters had a democratic right to make their feelings known. "However, if they were not happy with the results of today's election, they should forward their disagreement through proper channels, not on the streets," he said, according to the state-owned Solomon Islands Broadcasting Corp.

Rini, 56, defeated two contenders, including Sogavare, to take the post after two secret ballots of the nation's 50 lawmakers, Solomon Islands Broadcasting Corp. reported. The anger at his appointment appeared to stem from his close links with Sogavare's former administration led by Sir Allan Kemakeza Rini was deputy prime minister and a Cabinet minister which was heavily defeated in the election.

Kemakeza narrowly retained his seat in Parliament while his People's Alliance Party lost 11 of its 20 seats at the April 5 election. Rini was due to name his new 20-member Cabinet Wednesday and Parliament is expected to reconvene by month's end.

Rini said Tuesday he is committed to restoring peace and order to his troubled country with outside help. Prior to Tuesday's upheaval, law and order had been slowly returning to the impoverished archipelago of 480,000 following the nation's ethnic conflict, which was sparked by a rivalry between migrants from the island of Malaita and indigenous landowners on the main island of Guadalcanal, reports the AP.