Afghanistan demanded Tuesday that neighboring Pakistan work harder to combat terrorism amid an upsurge in Taliban-related violence targeting U.S.-led coalition and Afghan forces. The call, made by Afghan President Hamid Karzai's spokesman, comes a month after the leaders of both countries accused the other of not doing enough to crackdown on militants active either side of the border. 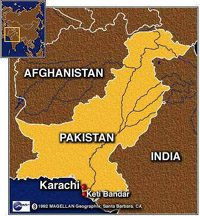 "We demand more and better cooperation from Pakistan , as well as the international community, against terrorism," Karzai spokesman Rahim Karimi told a news conference in the Afghan capital, Kabul . Afghanistan and Pakistan share a 2,450-kilometer-long (1,470-mile-long) porous frontier dominated by Pashtun tribesmen, often sympathetic to the Taliban, this country's toppled hard-line regime.

Militant attacks have increased on both sides of the border against Pakistan and Afghan forces, along with U.S.-led coalition soldiers operating in Afghanistan . " Afghanistan should shake hands as friends with Pakistan and work together in the struggle against terrorism," Karimi said. Pakistani and Afghan authorities have said that senior al-Qaida and Taliban leaders could be at large along the frontier separating their countries.

Taliban militants, some who are believed to take refuge in Pakistani territory, have threatened to step up attacks against U.S.-led coalition and Afghan forces during the spring and summer months. There has been a spike in suicide and roadside bombings and shootings claimed by the Taliban, particularly across southern Afghanistan .