Normally adventurous Chinese diners are eating fewer owls, civets and other wildlife due to fears of SARS and bird flu, according to a survey released Tuesday by U.S. and Chinese conservation groups. The survey of 24,000 people in 16 cities found that nearly 72 percent had not eaten wild animals in the past year, up from 51 percent in a similar 1999 survey, said San Francisco-based WildAid and the official China Wildlife Conservation Association. 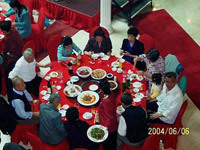 "Although not everybody believed that civets were to blame for SARS, the market still has been shrinking. Fewer and fewer people consume civets," Yin Feng, a researcher for the Chinese group, said at a news conference. Wild animals have long been delicacies in China , where they are served at banquets to show off the host's wealth. Rare species also are used in traditional medicine, which prescribes deer horn, snake blood and other products for a wide range of ailments.

Severe acute respiratory syndrome, which first emerged in China 's south in late 2002, was believed to have jumped to humans from civets, an animal sometimes served in restaurants. China also has suffered dozens of outbreaks of bird flu, which experts say might originate in migrating ducks and other wild birds.

Some 81.9 percent of people surveyed said they knew that SARS came from wild animals, according to WildAid and the China Wildlife Conservation Association. Of those, 50.4 percent stopped eating wild animals because of the link and 37.2 percent had decided to eat less.

The groups said their survey was conducted in random face-to-face interviews and inspections of restaurants, stores and markets in December and January. In addition, fewer restaurants are serving wild animals, the groups said. Of 472 restaurants surveyed, 43.2 percent served wild animals, 6.6 percent less than in 1999. But despite the attitude shift, the survey found that 22.8 percent more grocery stores and 17.7 percent more wholesale markets were selling wild animal products than in 1999.

Zhao Shengli, deputy secretary-general of the Chinese wildlife group, said the increase was due to a large and stable supply of legally farmed wild animals. Zhao said his group welcomed the increase in captive breeding because it would reduce poaching.

Some of the 80 species of wild animals were found in Chinese markets during the survey, the groups said. They included pangolin, ostrich, cape barn owl, sika deer, Asian giant soft shell turtle, elongated tortoise, Siamese crocodile, king cobra and the Chinese giant salamander but no civets.

About 32 percent of those surveyed said they chose to eat wild animals for health and nutrition, while 31 percent cited curiosity and 27 percent said it was for the taste. About 9 percent said they did it because it enhanced their social status. The groups called on the Chinese government to strengthen enforcement of bans on hunting and sale of wildlife. "The level at which we are consuming wildlife species is not sustainable and unless we can tame and limit our consumption, much greater damage will be done," said WildAid president Steve Trent, reports the AP.