A bomb blew up a pipeline supplying natural gas to a remote town in southwestern Pakistan on Tuesday, disrupting the supply to thousands of domestic consumers but causing no injuries, police said. Nobody immediately claimed responsibility for the attack in Mastung, a town about 50 kilometers (30 miles) south of Quetta, said Hamid Shakil, an area police officer. 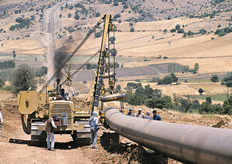 He said the pipeline caught fire after the attack, and engineers had been sent to the area to repair it. He gave no other details. Attacks against gas pipeline are common in Baluchistan of which Quetta is the provincial capital most blamed on renegade tribesmen who have been demanding an increase in royalties for resources extracted from their territory.

The government has said it was already paying enough to the tribesmen, and has carried our several operations against those responsible for targeting pipelines, security forces and other facilities in the province, reports the AP.