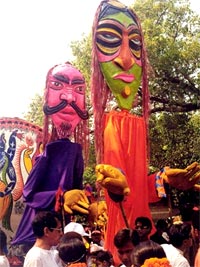 At least 26 people died and dozens were hurt last year in a spate of bombings blamed on the outlawed Islamic militant group Jumatul Mujahedeen Bangladesh. A bomb attack on a Bengali New Year music concert in Dhaka killed 11 people in 2001.

In addition, the country's bitterly feuding political parties, whose supporters have occasionally resorted to violence, are preparing for an election in January.

On Friday, men, women and children in brightly colored clothes took to the streets to parade, sing and dance to mark the holiday.

About 10,000 extra police and security agents were posted throughout the capital, Dhaka, to watch for trouble and use metal detectors to search those celebrating in the streets, said a statement from the city's Metropolitan Police.

"There's no particular threat from any group," and the extra security amounted to "precautionary measures," the statement said, reports the AP.