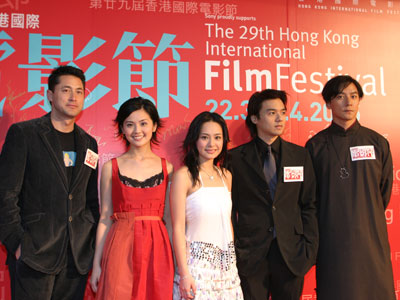 Tibetan film, "The Silent Holy Stones," directed by Wanmacaidan, won the International Film Critics Federation prize, known as the FIPRESCI, at the ceremony on Thursday.

The citation called the movie, about a young lama who returns to a home changed by modern influences, "a beautifully observed, very well-made and touching first feature from China that deals with the subject of cultural change with remarkable subtlety."

In the Asian Digital Competition, the gold winner was "Taking Father Home" by Ying Liang. Silver went to "Walking on the Wild Side" by Han Jie.

"Taking Father Home" is about a young boy's search for his missing father, and "Walking on the Wild Side," produced by famed Chinese filmmaker Jia Zhangke, tells the story of three misguided youngsters who flee after causing trouble in their hometown.

"We both do things the same way. We both use very low budgets. With your recognition and encouragement, we will keep making good movies," Ying said of himself and Han.

The citation called Zhou's film "an inspiring depiction, in the Chinese context, of the universal issue of high school education in a way that both challenges and encourages its audience to consider a more humane approach," reports the AP.