Italian forensic experts continued to search the final hideout of reputed Mafia boss Bernardo Provenzano on Thursday for clues that might identify people who helped him hide from authorities for more than 40 years. 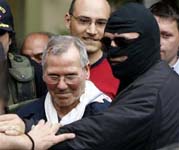 Provenzano, Italy's No. 1 fugitive, was arrested Tuesday in a rundown farmhouse just outside of his hometown of Corleone, Sicily, where the city council late Wednesday approved a resolution making April 11 "Liberation Day" for Corleone a town made famous by the "Godfather" movies.

"April 11, 2006, marks the end of a long, dark night that marked the destinies of too many generations of Corleonesi (residents of Corleone) who were forced to suffer the Mafia's criminal violence," the town said in a statement carried by the Italian news agencies. "The dawn of hope, the rebirth and the release can finally rise over Corleone."

The town also said it would name one of its streets "11 aprile," or April 11.

Provenzano had escaped capture many times and had earned the nickname "The Phantom of Corleone."

Meanwhile, experts at the farmhouse outside of town searched for any clues, such as fingerprints or DNA traces, that might help identify individuals who helped conceal Provenzano's whereabouts, the Italian news agency ANSA reported. Police arrested three people Wednesday accused of aiding the fugitive by delivering notes about the administration of Cosa Nostra affairs on the island.

Many of the so-called "pizzini" were written in code to conceal the identities of those he dealt with, ANSA reported.

Experts also were using infrared equipment to search for tunnels on the property where he was found and to try to locate any documents he may have hidden there, ANSA said.

Among the other evidence under review is a box of medicine for treatment following a prostate operation in Marseille, France, in October 2003, ANSA said.

Provenzano is believed to have taken over leadership of the Sicilian Mafia following the 1993 arrest of former boss Salvatore "Toto" Riina. During his years as a fugitive, Provenzano was convicted in absentia and given life sentences for more than a dozen murders of mobsters and investigators, reports AP.