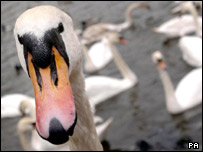 One hundred and one cases of the deadly H5N1 bird flu strain have been detected in Austria since the virus first surfaced in mid February, Austrian media reported Thursday.

In total, more than 2,100 specimen were tested since the virus first appeared on Feb. 14, the Austrian broadcaster ORF reported.

The tests, carried out by a laboratory in the Lower Austrian town of Moedling, determined the strain in 59 swans, 27 ducks, six chickens, four water fowl, two geese, one coot, one seagull and one egret, ORF said.

Vienna tops the list of affected areas with 40 cases.