Several cats have tested positive for the H5N1 strain of bird flu, Austrian state authorities said Monday, in the first reported cases of the disease spreading to an animal other than a bird here. Two or three cats, all of which are still alive, have tested positive for H5N1, Hans Seitinger, the top agriculture official for the Austrian state of Styria told the ORF state broadcaster. No further details were immediately available. 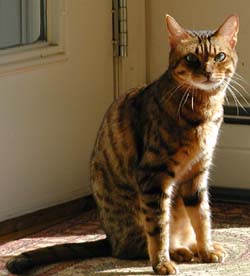 Austrian authorities confirmed the nation's first case of H5N1 in a wild bird last month. The country has since detected several dozen cases, including 29 birds in the state of Styria alone. Some of those cases were chickens that had been taken to the Noah's Ark animal shelter near Graz, the capital of Styria, that houses pets abandoned by their owners. The shelter also houses cats, but it was not immediately clear if the sick animals had come from there.

Last month, a cat found dead on the northern German island of Ruegen last month tested positive for H5N1. German officials have since warned pet owners to keep their cats indoors and dogs on a leash in areas where the disease has been detected.

According to the World Health Organization, several tigers and snow leopards in a zoo, as well as several house cats were infected with H5N1 during outbreaks of the disease in Asia in 2003 and 2004, reports the AP.