Serious corruption is threatening the future of Vietnam's ruling Communist Party, and a national party congress next week will focus on rooting it out of the system, a top party official said Thursday. 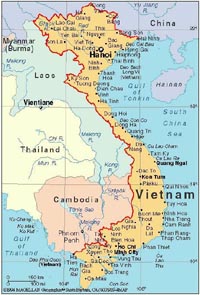 "Corruption ... remains very serious," said Politburo member Phan Dien. "It's a danger that impedes our renovation and national construction and it's a danger that even threatens the survival of our regime."

Dien said the country has made much progress in fighting corruption, but there was still a long way to go.

"Our leading task is how to make the fight against corruption, bureaucracy and wastefulness more effective," he told reporters ahead of the April 18-25 party congress.

Vietnam's top leadership is widely expected to face a major reshuffle at the congress, held once every five years. President Tran Duc Luong, 68, and Prime Minister Phan Van Khai, 72, are expected to step down to make way for younger leaders. The congress will also decide whether to reappoint party General Secretary Nong Duc Manh for another five-year term.

"There will be many changes in the Politburo and the party secretariat," Dien said, denying reports that the party was having difficulties in selecting its new top leadership.

The Communist Party has been rocked by a high-profile multimillion-dollar graft scandal at the Ministry of Transport, which forced the resignation of the transport minister and the arrest of his deputy earlier this month.

The ministry has been under intense scrutiny since the arrest in January of Bui Tien Dung, head of a ministry division known as Project Management Unit 18 that managed more than a dozen major infrastructure projects, many of them using official development assistance from international donors such as the World Bank and Japan.

The scandal has been covered extensively in the state-controlled media, reports the AP.