Violence shook Mexico's Pacific coast with a grenade attack killing two people in a restaurant and gunmen slaying a shop owner in Acapulco as tourist packed nearby beaches for the Easter vacation. 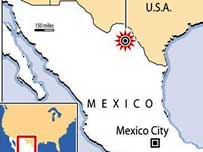 Police were trying to track down leads on the grenade attack, which also injured 16 people in Petatlan, 165 kilometers (100 miles) northwest of the resort city of Acapulco.

"I heard a deafening explosion and when I turned around I saw what looked like sparks, and so I dived to the floor," said 21-year-old Miguel Angel Cortes Blanco. "I didn't feel anything at first, but then I felt an intense pain in my legs and my arm and I couldn't get up."

The federal Attorney General's Office issued a news release saying the attack appeared to stem from an argument between two individuals. It did not elaborate.

Many of the victims were city hall employees, the mayor's aide said.

The assailants arrived in a car, asked employees at the shop for Herrera and then shot him five times with hand guns, said Jorge Valdez, a spokesman for the Acapulco City government.

The attacks came two days after assailants threw a grenade at a home in Acapulco, wounding five people.

Acapulco has been shaken this year by more than a dozen high-profile gun slayings as well as four grenade attacks on police stations.

Federal investigators link the violence to a turf war between drug gangs in northern Mexico for lucrative smuggling routes into the United States, reports the AP.