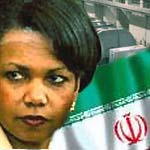 Rice also telephoned Mohamed ElBaradei, the head of the International Atomic Energy Agency, to ask him to reinforce demands that Iran comply with its nonproliferation requirements when he holds talks in Tehran on Friday.

While Rice took a strong line, she did not call for an emergency meeting of the Council, saying it should consider action after receiving an IAEA report by April 28. She did not elaborate on what measures the United States would support, but economic and political sanctions are under consideration.

The European Union is considering travel restrictions on Iranian officials, but White House and State Department spokesmen said what the Security Council might be asked to do was under discussion.

"It's time for action and that is what the secretary was expressing," Scott McClellan, the White House spokesman, said. "The president wanted to make sure that she made that very clear to all that were listening."

On March 29, the Security Council adopted a statement that gave Iran 30 days to clear up suspicion that it wants to become a nuclear power. The statement demanded Iran comply with IAEA demands that it suspend enrichment and allow unannounced IAEA inspections.

If Iran goes ahead with its enrichment program the United States and European allies are certain to press for a Council resolution.

"You can be sure that it needs to be more than a presidential statement at this point," McClellan said.

Asked if the United States would be running a risk of a disagreement with other members of the Council by pushing for strong measures, State Department spokesman Sean McCormack said, "There is now a consensus Iran should not be allowed to obtain a nuclear weapons program."

Iranian President Mahmoud Ahmadinejad, announcing on Tuesday that his country had crossed the line into enrichment, said Iran's objectives were peaceful. Iran is said by many analysts to lack the equipment, including a nuclear reactor, to make nuclear weapons, reports AP.