The Bombay High Court lifted a government-imposed ban on the city's famous dance bars Wednesday. The ban on girls dancing in bars a longtime feature of the city's nightlife was ordered last August by the government of western Maharashtra state of which Bombay is the capital. 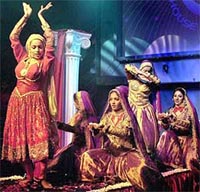 On Wednesday, Bombay High Court judges F.I. Rebello and R. Dalvi said the government ban amounted to discrimination against the dancers. The ban will not be lifted immediately the court has permitted the government an eight-week period during which it can appeal the High Court order to India 's highest court, the Supreme Court.

The 274-page order questioned how the government could discriminate against dancing in bars while continuing to permit dancing in five-star hotels and discotheques. More than 75,000 dancers were thrown out of jobs after the ban was announced. Bar owners in some 700 establishments in Bombay and another 650 in the rest of Maharashtra state reported a substantial drop in collections after dances were outlawed.

Before the ban in Bombay , India 's entertainment capital, thousands of men nursed their drinks at bars where girls and women in revealing clothes danced to popular Bollywood songs. Over the past several months, police raids were commonplace on bars that continued to feature dancing girls and hundreds of dancers were arrested, reports the AP.