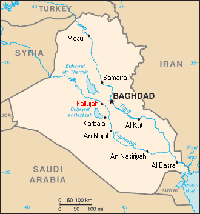 In the ancient city of Tal Afar, a suicide car bomber drove up to a busy vegetable market and detonated his explosives, killing at least two shoppers and wounding 7 others, police Brig. Abdul-Hamid Khalaf said.

Tal Afar, 420 kilometers (260 miles) northwest of Baghdad, has been singled out by U.S. President George W. Bush as a success story for American and Iraqi forces in the drive to quell the insurgency.

A parked car bomb exploded near a medical facility in the city of Khalis, killing two bystanders and wounding at least 23 others, police said. Khalis is 80 kilometers (50 miles) north of Baghdad.

The third car bomb exploded in Baghdad, targeting a police patrol in the northern district of Wazziriyah. The blast killed one policeman and two civilians, and wounded four others, police said.

Also in Baghdad, gunmen hunted down three different government employees and shot them dead on their way to work.

An internal affairs officer at the Interior Ministry was killed by men in two cars while leaving his house in Amil in western Baghdad, and a Housing Ministry employee was killed as he drove to work in the same neighborhood, police said. In northern Baghdad, gunmen shot down an Oil Ministry worker at a bus stop, police said.

The motives of the targeted attacks were not known, police said, reports the AP.