Turkish troops killed 12 Kurdish guerrillas in a clash in a rugged area used by the guerrillas to sneak into the country from bases in northern Iraq , authorities said Wednesday. Two sergeants were also killed in the clash. The fight in the Bestler-Dereler area, just north of Sirnak near the Iraqi border, broke out Tuesday when troops had surrounded the rebels and demanded they surrender, and the guerrillas responded with gunfire. 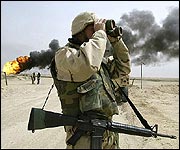 Turkish troops had launched an anti-guerrilla offensive in the area following the killing of five soldiers in an ambush by the guerrillas on April 4. At least 18 Kurdish guerrillas and seven soldiers have been killed in clashes since then. Turkish troops were still hunting guerrillas in the mountanious area, private NTV television said. The latest guerrilla casualties included two female guerrillas, authorities said.

Clashes between Turkish troops and autonomy-seeking Kurdish guerrillas have recently intensified in the region with more Kurdish guerrillas reported to be infiltrating into the country from Iraq . More than 37,000 people have been killed in the conflict since the guerrillas took up arms for autonomy in 1984, reports the AP.