Two soft-drink companies were sued Tuesday by parents complaining that there might be cancer-causing benzene in kids' drinks. 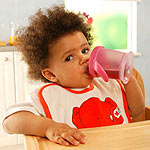 Attorneys filed class-action lawsuits against the companies in Suffolk Superior Court in Boston and Leon County Circuit Court in Tallahassee, Florida. They accused Polar Beverages Inc. and In Zone Brands Inc. of not taking steps to keep benzene from forming in their beverages.

The presence of those ingredients doesn't mean benzene is present. Scientists say factors such as heat or light exposure can trigger a reaction that forms benzene in the beverages.

"It's impossible for parents to know which soft drinks are safe and which contain cancer-causing benzene," said Timothy Newell, one of the plaintiffs.

The lawsuits allege that independent laboratory tests found benzene in the companies' drinks at levels above the federal drinking-water limit, which is 5 parts per billion.

Food and Drug Administration sampling from 1995 through 2001 found similar results, and FDA is currently doing more tests. FDA officials maintain there is no safety concern and that levels are still relatively low compared with other sources of exposure to benzene.

In a statement, Polar Beverages president and CEO Ralph D. Crowley Jr. said all of his company's products are safe.

"Polar is committed to ensuring the safety of our products through in-depth research and testing," Crowley said. Polar Beverages had an independent laboratory test its products as recently as February and no trace of benzene was found, he said.

The plaintiffs ask that companies be prohibited from selling drinks that may contain benzene in Massachusetts and Florida.

They point out that other companies have either removed one of the ingredients or added ingredients to keep benzene from forming.