Indian police on Wednesday arrested six men suspected in bombings last month at a temple and train station in Hinduism's holiest city that killed 20 people, an official said. The men were caught with explosives, grenades and an assault rifle, said S.K. Agarwal, a top home ministry official in the state of Uttar Pradesh. "It seems this group was planning another strike," he said. 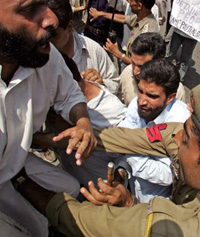 Police have said the March 7 bombings in Varanasi , the holiest city in Hinduism, killed 20 people. Varanasi is located in Uttar Pradesh. Officials have blamed Islamic militants for the attacks, and Agarwal said the six suspects arrested late Tuesday were members of Harket-ul Jehadi Islam, an offshoot of the better-known Jaish-e-Mohamad, which is fighting to wrest the predominantly Muslim region of Kashmir from largely Hindu India.

He alleged that Harketul Jehadi Islam operates out of Bangladesh and has ties to Pakistani intelligence, although police were still trying to figure out what country the suspects came from. India has long accused Pakistan of aiding Islamic militants in Kashmir , a Himalayan region the rivals have fought two of their three wars over. But Islamabad has always denied the charge, reports the AP.