Thailand 's opposition on Wednesday celebrated the fall of Prime Minister Thaksin Shinawatra after weeks of anti-government rallies, but warned of fresh protests if he doesn't fulfill his promise to leave after a new Parliament convenes. Thaksin announced Tuesday night after meeting with Thailand's revered king that he was stepping down to end a tenacious movement to oust him because of allegations of abuse of power, corruption and destroying democratic institutions. 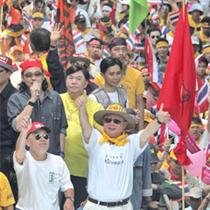 "I am sorry that I will not accept the premier's post," Thaksin said during a brief televised speech, his voice close to breaking despite his normally supremely confident demeanor. "We have no time to quarrel. I want to see Thai people unite and forget what has happened." Thaksin, a telecommunications magnate who swept to power in a landslide in 2001, said he would remain in a caretaker role until a successor is chosen by his ruling Thai Rak Thai party once Parliament resumes within the next 30 days.

Asked about Thaksin's successor, Deputy Prime Minister Somkid Jatusripitak said, "Thai Rak Thai is a big party. There are many senior members who are capable and could do the job." Thaksin's party won snap elections he called for Sunday after campaigning virtually unopposed because of an opposition boycott, but early results showed that nearly 4-in-10 voters cast protest ballots.

While some opponents praised Thaksin's move to step down, others remained guarded, fearing he would continue to control the government. "If he does not step down by the end of the month, and continues to dominate the next government through proxies, the People's Alliance for Democracy would regroup and resume a major protest," said Sondhi Limthongkul, who led recent rallies that drew as many as 100,000 protesters.

Pipob Thongchai, another alliance leader, said a final demonstration planned for Friday would go forward. Demonstrators who had camped in front of Government House for weeks were packing up and moving out Wednesday. Thaksin's offer to resign was unexpected and made shortly after he met with Thailand 's much-revered King Bhumibol Adulyadej. The king's role, if any, was unclear but Thaksin had earlier said that only the constitutional monarch could force his ouster.

"If the king just merely whispers to me, 'Thaksin, you resign,' then I will resign right away," he said when pressure for him to step down was mounting. Thaksin said his party on Sunday won 57 percent of the popular vote and virtually all of the 500 seats in Parliament, but official results were not yet announced. Roughly 37 percent cast a protest ballot for no candidate, while the rest went to obscure parties or were spoiled, according to preliminary results.

By-elections in 38 constituencies left with no winning candidate were scheduled for April 23, but the main opposition Democrat Party said Wednesday it would boycott that contest as well.

"We will join elections once there have been political reforms," the party's deputy leader Sathit Wongnongthoey said. "Checks of state power will be an important issue, for example, independent agencies and the responsibilities of the legislature." Thaksin's announcement late Tuesday was greeted with cheers by more than 1,000 anti-government protesters camped outside his office, watching the speech on a large TV screen.

But supporters of Thaksin, who enjoys strong support in rural areas in part because of his generous social welfare and economic assistance programs, were visibly upset.

"He's fought against drugs. He's fought the mafia," said one Bangkok taxi driver, wiping away tears. "I'm very sad." Thaksin said that scores of world leaders would be coming to Thailand in two months for the 60th anniversary of the king's accession to the throne, and that the country should "clean up our house" before then.

Thitinan Pongsudhirak, a Chulalongkorn University political scientist, called Thaksin's decision a result of "royal involvement without intervention." "Everyone wants to come to the June diamond jubilee celebration with grace and dignity. We don't want to have protests in the streets," he said.

Thaksin was the second Thai leader to step down under pressure in the past decade and a half, but this time without bloodshed. In 1992, demonstrators against a military strongman were gunned down before the king stepped in to end the fighting and usher in a period of stable democracy.

Opposition to Thaksin gained momentum in January when the prime minister's family announced it had sold its controlling stake in telecommunications company Shin Corp. to Singapore 's state-owned Temasek Holdings for a tax-free $1.9 billion. Critics allege the sale involved insider trading and complain a key national asset is now in a foreign government's hands. Thaksin also has been accused of stifling the media and mishandling a Muslim insurgency in southern Thailand that flared under his rule, reports the AP.