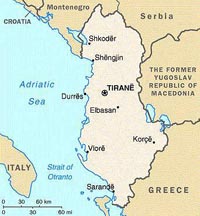 The deal, part of the threshold program of the U.S. Millennium Challenge Corporation, is expected to start this summer after the U.S. Agency for International Developments declares tender winners of companies to monitor the project application.

Corruption threatened Albania's democracy, stifled its growth and weakened foreign and private investment, according to Danilovich. "Albania's Program will target corruption on a systemic level, and will include dramatic reforms in the areas of tax administration, public procurement, and business registration," said Danilovich at a briefing after the signing ceremony.

Albania, one of Europe's poorest countries, slipped 18 places in October to 126th among the 159 nations in Transparency International's 2005 corruption perception index, an annual ranking closely watched in eastern Europe. The international community has told Albania it must fight corruption, curb human trafficking, improve the judiciary and its administration if it wants to join the European Union and NATO.

"I would like to assure you and your government that through the rule of law and legal procedures, in collaboration with you and the international community, we shall give the proper response to these issues so that we soon deserve the Millennium Challenge aid which is of extreme importance for Albanians," said Albanian Premier Sali Berisha. Albania should successfully complete the project to qualify for programs from the Millennium Challenge, which is an initiative of the administration of U.S. President George W. Bush, that has given an aid up to US$1.6 billion (1.33 billion) to a dozen other countries, reports the AP.