Foreign Minister Sergey Lavrov met Monday with his counterpart from Myanmar, Nyan Win, who was on his first visit to Russia with a high-ranking delegation. "I feel as if I am visiting my own brother. It is indeed a great pleasure for me to visit the Russian Federation," the Burmese diplomat said. 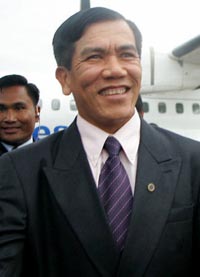 The Foreign Ministry said the two had discussed the importance of a regular dialogue on international and regional problems and interest in cultivating cooperation in fighting terrorism and drug-trafficking. Nyan Win accompanied a senior military official, Gen. Maung Aye, who is paying a four-day visit to Russia. The general is the highest-ranking leader to visit Russia since a trip by late Myanmar dictator Gen. New Win in 1965.

Asian diplomats had said the delegation's visit was expected to focus on a range of military and defense issues, but the Russian Foreign Ministry made no mention of them.

Since the ruling military took power in Myanmar in 1988, Russia has played a major role in the modernization of the country's army. The Southeast Asian nation has bought MiG-29 fighter jets and Mi-17 helicopters from Moscow. Myanmar is one of the world's poorest countries but has one of the region's largest armies, used mainly to crack down on dissent and fight against ethnic minority rebels.

The military has ruled Myanmar also known as Burma since 1962. The current junta came to power in 1988 after crushing a pro-democracy uprising and it has been accused of rampant human rights abuses. The United States has proposed putting Myanmar on the agenda of the U.N. Security Council, a means of formally discussing the actions of the military junta, but Russia and China, both of whom hold veto power, have objected, reports the AP.