Russian scientists conducting tests in China's Songhua River over the past two months have found 50 times the acceptable concentration of chlorphenols, the waste product of cellulose and paper mills, a Russian regional environmental official said Monday. 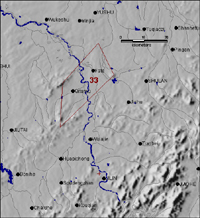 Viktor Bardyuk, head of the environmental protection department of the Natural Resources Ministry of Siberia's Khabarovsk region, told NTV television that water samples taken in February and March had also contained high concentrations of heavy metals such as iron, zinc, nickel and mercury, and polyaromatic hydrocarbons, which are carcinogenic.

Russian scientists have been monitoring the Songhua, which feeds into Siberia's Amur, following a November factory explosion that spewed benzene and other toxic chemicals into the river and forced Chinese authorities to cut off drinking water to millions of people. By the time the spill penetrated Russian waters, the concentration of toxins had fallen sharply.

Ecologists warned at that time that the pollution would intensify come the spring thaw, but Chinese and Russian officials recently ruled out the possibility of a further round of pollution caused by the melting of river ice, according to Zhou Shengxian, Beijing's top environmental official.

China's State Bureau of Environmental Protection said last week that it would spend 10 billion yuan (US$1.2 billion; Ђ 1 billion) cleaning up the heavily polluted Songhua along the Russian border, reports the AP.