Thai newspaper shuts itself down

About 2,000 pro-government demonstrators gathered outside the headquarters of a Thai media group Thursday, angry over an alleged insult to the country's revered king by one of its newspapers. 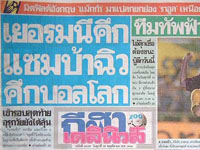 Thai newspaper shuts itself down

Police threw up barricades around the entrance to the The Nation Group building on the outskirts of the Thai capital as protest leaders demanded to meet with the writer of an article that allegedly insulted King Bhumibol Adulyadej.

Earlier, the Thai-language Kom Chad Luek daily closed itself down for three days starting Thursday to apologize for misquoting a reference to the monarch by a leader of the movement to oust Prime Minister Thaksin Shinawatra.

The chief editor of the Kom Chad Luek newspaper has also resigned over the incident, said Thepchai Yong, a senior editor of The Nation Group.

Kom Chad Luek had earlier admitted that it failed to print in full a reference to King Bhumibol made by protest leader Sondhi Limthongkul, thus leaving his remarks in a form that might upset the monarch. The report could also open up the newspaper to charges of lese majeste.

"The Kom Chad Luek newspaper is punishing itself for the mistake by stopping to print" for three days, Thepchai told reporters. "The chief editor has already resigned."

Demonstrations for and against Thaksin have been a daily occurrence in the Thai capital over the past few weeks, with the anti-Thaksin groups calling for the king to intervene by appointing an interim prime minister. Both sides pledge their loyalty to the constitutional monarch, reports the AP.