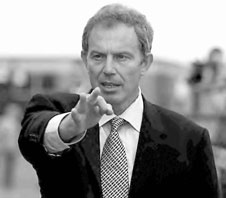 Blair met privately with Yudhoyono in the capital, Jakarta, and diplomats from the two nations planned to hold more extensive discussions later.

Before the British prime minister arrived Wednesday night, however, protesters angry at Britain's role in the occupation of Iraq shouted "Go to hell, Blair!" outside the heavily fortified British Embassy and accused him of "wanting to deepen Western imperialism against Muslims" by coming to Indonesia.

Blair's trip is the first by a British prime minister to Indonesia in more than two decades, showing the Southeast Asian country's renewed importance to Western nations fighting extremists and seeking alliances with moderate Muslims.

Indonesia has a long tradition of moderation and secular rule, but is battling al-Qaida-linked militants blamed for several bombings in recent years, including two sets of attacks on the resort island of Bali.

Blair and his wife Cherie, arrived from New Zealand.

Blair's official spokesman said the prime minister was set Thursday to discuss police cooperation with Indonesia, and would normalize defense relations with the country.

Speaking on customary condition of anonymity, he said Indonesia "is very much looking to promote mainstream Islamic thinking and work with others, including ourselves, to ... tackle the issue of Islamic extremism."

Asked about alleged human rights abuses in Indonesia, he said the country has made "huge strides" since Yudhoyono became the country's first directly elected president, reports the AP.