Unions meet over protest in France against new labor law

French unions, emboldened by a million-strong march and nationwide strike, appealed to President Jacques Chirac to intervene over a contested jobs law and were meeting Wednesday to map out plans to advance their protest movement. Chirac's office said he would speak out on the most thorny part of the law, the so-called first jobs contract, in the next few days. Chirac has so far stood behind Prime Minister Dominique de Villepin's defense of the law, but pressure on the premier to withdraw the measure has reached unprecedented heights. 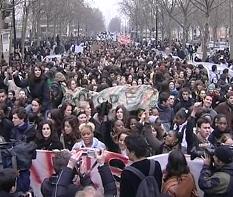 Unions meet over protest in France against new labor law

Five leading unions were to meet Wednesday afternoon to decide their next move, after more than 1 million demonstrators poured onto France 's streets Tuesday and strikers shut down the Eiffel Tower and disrupted transport services in the largest nationwide protests to date against the law. The unions decided to send a letter to Chirac asking for a new parliamentary debate on the jobs law but with the "first job contract," which makes it easier to fire young workers, removed, according to the Workers' Force union.

Unions and students assailed Villepin for pushing the law through the lower house of parliament last month by using an obscure blocking tactic to avoid floor debate. Aside from a new vote, another possible way out of the crisis could come Thursday, with a decision by the Constitutional Council on whether the law violates international labor codes.

While Villepin held firm, fractures threatened to divide his conservative government. Interior Minister and presidential hopeful Nicolas Sarkozy, in a clear break with Villepin, suggested suspending the new contract to allow for negotiations.

"When there's a misunderstanding, one must make a compromise. This word is not a bad word," Sarkozy said in an interview with the daily Parisien published Wednesday. After Tuesday's protests, Sarkozy invited some 200 police officers, some still wearing their protective gear, to the Interior Ministry for wine and nibbles.

"I'm proud of you," he said. " Mission accomplished." Riot officers, under orders to arrest as many troublemakers as possible, moved aggressively against youths who pelted them with stones, bottles and other projectiles. Police used water cannons and tear gas to disperse several thousand youths who gathered after the otherwise peaceful march finished.

Police said 46 demonstrators were injured in the Paris skirmishes, along with five police officers. Sarkozy said nine police were injured nationwide. Police made 787 arrests around the country 488 of them in Paris , National Police Chief Michel Gaudin told The Associated Press.

Scattered protests continued Wednesday, as a group of young people blocked traffic on the major bypass around the western city of Rennes and several other roads leading out of town. Students and labor unions say the contract is a first step toward eroding France 's cherished workplace protections. Set to take effect next month, it would let companies fire employees aged under 26 without reason in the first two years on the job.

Villepin says the greater flexibility will encourage companies to hire young workers, who face a 22-percent unemployment rate the highest in Western Europe . But as protests have grown, his government and chances of running for the presidency next year  have appeared increasingly fragile. Villepin's sputtering effort at reform underscores the dilemma facing many countries in Europe that have expensive job protections and social safety nets under threat by competition from fast-rising Asian economies with cheaper, less protected workers, reports the AP.