Secretary of State Condoleezza Rice said that Iran was a menace for reasons other than its alleged drive to build a nuclear bomb and that the U.S. and its allies have "a number of tools" if Tehran does not change its ways. "I think there's no doubt that Iran is the single biggest threat from a state that we face," Rice told a Senate panel on Tuesday. 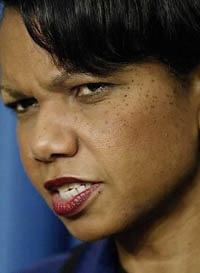 She claimed strong international backing for the U.S. position that Iran must not be allowed to continue what she claimed is a covert effort to gain bomb-making expertise and technology. "We need now to broaden that thinking and that coalition, not just to what Iran is doing on the nuclear side but also what they're doing on terrorism," Rice said. "Those are some of the discussions that I have with these same states." She repeated claims that Iran is meddling in Iraq , bankrolling terrorism in Lebanon and the Palestinian territories and repressing its people.

"We have a number of tools, I think, at our disposal, including in sharpening the contradiction between the Iranian people and a regime that does not represent them," Rice said. The $75 million ( Ђ 62 million) that has been requested to promote democracy in Iran could be used for that fight, she said.

Options could include other measures at the U.N. Security Council to "further isolate the Iranian government," Rice said. She did not elaborate. The reference could cover a variety of international punishments that the United States has said it would not seek as a first option. Russia and China , allies of Iran with veto power in the council, have said they oppose penalizing Iran .

The council soon may hand the United States a partial victory after weeks of deadlock. Its permanent members were making progress toward a written rebuke of Iran over its nuclear program; Iran insists the program is intended only to produce electricity.

Late Tuesday, Britain and France , backed by the United States , circulated among council members their latest draft of a proposed statement. The draft makes significant concessions to Russia and China , though diplomats said differences remain. The council planned to meet Wednesday to discuss the draft.

At the Senate Appropriations subcommittee hearing, Rice was not asked about the potential for a U.S. or international military strike against Iran . The Bush administration says that option remains on the table in theory, but it is pursuing only diplomatic solutions now.

The United States has had no diplomatic relations with Iran since the 1979 storming of the U.S. Embassy in Tehran . Washington long accused the clerical government of exporting terrorism. European nations, Russia , China and others have diplomatic, trade and other ties to Iran . Rice suggested that at least some allies will agree to try to isolate Iran if the nuclear standoff continues.

Russia and China allowed Iran 's case to move to the Security Council this month, which was seen as a diplomatic success for the United States . Since then, however, those nations opposed draft versions of the written rebuke. "We've been able to bring the Russians along to a degree but we've had to work harder on that and on the Chinese," Rice said.

She suggested that the hardline leader Iran elected last year is his own worst enemy, noting that President Mahmoud Ahmadinejad has made fiercely anti-Semitic and anti-Israeli statements, reports the AP.