Rice asks Russians for probe into whether they leaked U.S. plans to Saddam

Secretary of State Condoleezza Rice said Tuesday she has asked her Russian counterpart to investigate a report that Russian intelligence fed U.S. battle plans to Saddam Hussein before the 2003 invasion of Iraq. 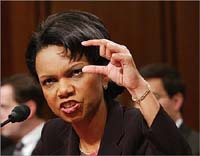 Rice asks Russians for probe into whether they leaked U.S. plans to Saddam

"I have talked with the Russian foreign minister and asked them to look into this and to take it very seriously," Rice said.

At the same time, Gen. Peter Pace, chairman of the Joint Chiefs of Staff, raised the possibility that the allegation of Russian collusion might be "disinformation," which in military parlance could mean that American commanders had sought to spread false information about battle strategy in order to deceive Saddam about actual troop movements.

According to Reuters, Deputy State Department spokesman Adam Ereli said Rice spoke via telephone to Russian Foreign Minister Sergei Lavrov on Tuesday about alleged intelligence-sharing between Russia and Iraq before the U.S.-led invasion of Iraq three years ago.

"She asked them to look into this question about documents to the Iraqis and conduct a serious investigation. She said it was important," said Ereli of Rice's call to Lavrov.

A Pentagon report this month said a captured April 2, 2003, document from the Iraqi minister of foreign affairs to Iraqi President Saddam Hussein stated that the Russian ambassador had funneled intelligence on U.S. plans to the Iraqi government.

Another Iraqi document, dated March 24, 2003, referred to Russian "sources" inside the U.S. military's Central Command headquarters in Qatar, according to the report.

"This is a report that we take seriously and we are asking the Russians to look into it," said Ereli.

The allegation has prompted the U.S. anger over the Russians. "We would take very seriously any suggestion that this may have been done, maybe to the detriment of American forces," Rice said in an interview on Sunday.