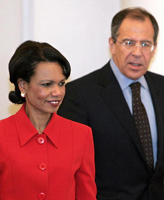 With Secretary of State Condoleezza Rice at his side, Lavrov defended Russia's invitation to Hamas to visit Moscow, saying it was important that the Quartet position demanding renunciation of violence and acceptance of Israel be conveyed directly to the Islamic group.

He said it is in the interests of the Palestinian people that Hamas accept the Quartet stand on the Israeli-Palestinian conflict.

Shortly after Hamas won January's Parliamentary elections in the Palestinian territories, the United States joined with Russia, the United Nations and the European Union the Quartet in a declaration that stated that Hamas must recognize Israel, renounce terror and accept international commitments made by the Palestinian Authority.

It was important to make clear to Hamas that "the Quartet position doesn't remain on paper," Lavrov said.

He and Rice covered a range of international issues during dinner discussions Monday night and a follow-up meeting Tuesday morning. Lavrov complained that progress toward Russian accession to the World Trade Organization has been too slow and suggested the United States was to blame.

Later, after talks at the White House, Lavrov said President George W. Bush is fully committed to Russian membership in the WTO.

"The United States president has once again reconfirmed his firm commitment to the finalization of the Russia-U.S. negotiations with regard to Russia's WTO accession and has put this matter under his close scrutiny," Lavrov said.

Bush also said, according to Lavrov, that he wants June's Group of Eight summit in Moscow to be a success.

On the Middle East, Lavrov told reporters that during the visit of the Hamas delegation to Moscow, the group promised to respect "the authority and competencies" of Palestinian President Mahmoud Abbas.

"We also heard from them that they would be ready to express their position on the road map and to hopefully endorse the road map -- as drafted by the quartet -- without any reservations to be added to this road map," Lavrov said.

Finally, Lavrov said, the Hamas representatives said they would consider joining the Arab initiative on the Middle East conflict that was adopted at the Arab League summit in Beirut in 2002.

Lavrov's comments seemed aimed at countering criticism of Moscow for extending an invitation to a group whose charter calls for the destruction of Israel.

The United States welcomed Russia's insistence to Hamas that the group abide by the spirit of the Quartet declaration.

The Hamas delegation was led by political chief Khaled Mashaal, who was combative toward Israel in public remarks in the Russian capital.

He said Israel must first withdraw from lands captured in the 1967 Six-Day War and allow the return of Palestinian refugees if it wants peace.

He also demanded the withdrawal of Jewish settlements in the West Bank, removal of a security barrier between Israel and Palestinian territories and the release of prisoners, reports AP.