The impoverished and wartorn country of Sudan is considering trying to create a nuclear program to generate electrical power, its president told the state-owned Kuwait Television in an interview aired Monday. President Omar al-Bashir said his government believes that its energy resources will not cover an expected increase in needs for electrical power in the next 25 years in the Arab-African country. 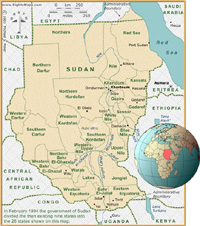 "During that period, nuclear energy comes in to fill the deficit in electrical power generation," al-Bashir said in the interview conducted Sunday. He spoke from the Sudanese capital of Khartoum, where his nation is hosting the Arab League summit that starts Tuesday. He did not explain how the country might be able to afford such a program.

Sudan has significant oil reserves a flashpoint of a 21-year civil war that officially ended last year but is not a major oil producer at the moment. It could, however, attract more foreign investment if it were able to end other conflicts that still wrack the country, including violence in Darfur.

The president said his country had contacts with "the agency" in regard to such a nuclear program. He did not specify which agency, but presumably meant the International Agency for Atomic Energy, the United Nations nuclear watch dog based in Vienna, Austria.

Some have feared the Mideast which Sudan borders could suffer a regional arms race and see other countries come forward with nuclear ambitions because of Iran's controversial nuclear program. The top U.N. envoy in Sudan, Jan Pronk, warned earlier this week that much of Sudan is in trouble, with violence in Darfur worsening, a Ugandan rebel group terrorizing the south, and new turmoil possible in the east.

A year ago, the U.N. Security Council voted to send 10,700 U.N. peacekeepers to monitor a January 2005 peace agreement between Sudan's mostly Muslim north and the Christian and animist south. Some 2 million people died in that 21-year conflict. Over 7,000 peacekeepers are now deployed. A separate 7,000-strong force from the African Union has been trying to prevent the three-year conflict in Darfur from escalating.

An estimated 180,000 people have died, mainly of hunger and disease, and some 2 million have been displaced since rebels from Darfur's ethnic African population revolted, accusing the Arab-dominated government in Khartoum of discrimination and decades of neglect, reports the AP.