In an unusual move, Secretary of State Condoleezza Rice telephoned Afghan President Hamid Karzai on Thursday seeking a "favorable resolution" of the case of an Afghan man on trial for his life for converting to Christianity from Islam. 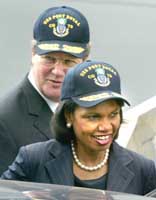 It is important for the Afghan people to know that freedom of religion is observed in their country, Rice's spokesman, Sean McCormack, said in reporting Rice's call to Karzai.

In deference to the country's sovereignty, Rice evidently did not demand specifically that the trial be halted and the defendant released.

"This is clearly an Afghan decision," McCormack said. "They are a sovereign country."

Still, her direct appeal to a foreign leader in a proceeding in his country is an unusual move.

On Wedneseday President George W. Bush the United States expects Afghanistan "to honor the universal principle of freedom," to worship.

Islamic Sharia law considers a Muslim an apostate for leaving his religion, even for Judaism or Christianity, recognized by Islam as "religions of the book" and acceptable.

Bush did not demand that the trial of Abdul Rahman, 41, who became a Christian 16 years ago, be stopped or Rahman released. He said, however, that he wanted to make sure that "people are protected in their capacity to worship."

Rice followed Bush's comments by meeting at her office with Afghan Foreign Minister Abdullah Abdullah, who is visiting Washington, and told him she was deeply troubled by the case. She said the prosecution was "contrary to universal democratic values," when she said include freedom of religion, which the United States fought for in Afghanistan and elsewhere, reports AP.