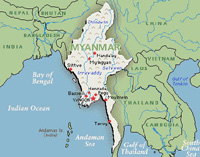 Syed Hamid's trip as an envoy of the Association of Southeast Asian Nations was originally scheduled for January, but has been postponed several times by Myanmar's military rulers for various reasons, reports the AP.