Indonesia has made great strides in detecting and treating tuberculosis but more needs to be done to keep pace with international efforts to wipe out the deadly disease by 2050, a senior WHO official said Thursday. 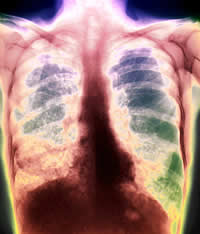 Speaking ahead of World Tuberculosis Day on Friday, the World Health Organization's leading expert on the disease in Indonesia said the country was "very close" to reaching an interim goal of identifying and treating 70 percent of estimated infections.

Tuberculosis, a respiratory illness that is transmitted from person to person by infected sputum, kills 140,000 people annually in Indonesia, a rate topped only by India and China. Along with Bangladesh and Pakistan, the five nations account for half the world's total cases.

Health officials worldwide have set a goal of cutting global infections in half by 2015 from a baseline of 1990. They also aim to eliminate the disease altogether by 2050, reports the AP.