Premier Silvio Berlusconi said Wednesday that Italy is facing a "democratic emergency" and accused the center-left opposition of organizing protests to disrupt his election campaign rallies. 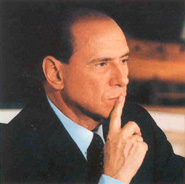 On Tuesday night, youths scuffled with police outside a theater in Genoa, in northern Italy, where Berlusconi was leading a rally of his Forza Italia party supporters.

"It is unacceptable that the left tolerates within its ranks those who normally practice violence," said Berlusconi. "More and more the left organizes (the protests), I don't believe there is any spontaneity because it has become the rule wherever I go for my electoral meetings."

"I really believe that we are in a situation of democratic emergency," he said.

Berlusconi is campaigning ahead of April 9-10 election, when he faces a difficult challenge by the center-left led by Romano Prodi, a former premier and EU chief.

Berlusconi's conservatives trail behind the opposition according to most opinion polls.