Dismissed juror: US has not proven case in terror trial

A juror who was dismissed Wednesday from the federal terrorism trial of a father and son said prosecutors have so far failed to prove that the younger man attended an al-Qaida training camp. 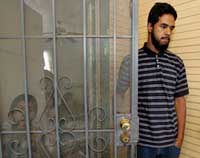 Dismissed juror: US has not proven case in terror trial

Andrea Clabaugh, 39, was dismissed after revealing that she once dated a law enforcement official. Outside court, she told reporters that prosecutors had succeeded in portraying 23-year-old Hamid Hayat as anti-American but not as a trained terrorist.

"They've shown that Hamid was interested in acting against America and those ideas and thoughts, but they haven't proven that he actually attended a camp, that he took weapons training and that he (intended) to come back here and do anything," said Clabaugh. "At this point in time, I do not think the government has proven its case."

Her comments come as the government nears the end of its case against Hayat and his father, Umer Hayat, a 48-year-old ice cream truck driver.

Both men are accused of lying to the FBI about the son's suspected attendance at a terrorist training camp in Pakistan in 2003. Hamid Hayat also faces charges of providing material support to terrorists by attending the camp.

Prosecutors allege that he was awaiting orders to attack hospitals, banks and grocery stores after returning to the U.S. in May 2005. The Hayats were arrested in June and have pleaded not guilty. They are being tried at the same time but before separate juries.

Clabaugh, who sat on Hamid Hayat's jury, said she was removed because she dated a sheriff's deputy 11 years ago. She said she did not recall that detail or consider it relevant during jury selection.

She told U.S. District Court Judge Garland Burrell Jr. about the relationship two weeks ago. He kept her on Hamid Hayat's jury but reconsidered and removed her Wednesday.

Clabaugh said she does not know if other jurors share her views because they have not discussed the case among themselves. Prosecutors and defense attorneys declined comment, reports AP.