The leader of the Belarusian opposition urged solidarity Wednesday in the face of a growing crackdown on government critics protesting the disputed re-election of authoritarian President Alexander Lukashenko. 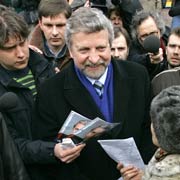 "We must defend one another," Alexander Milinkevich told demonstrators amid arrests and scare tactics targeting protesters gathered day and night on a freezing downtown square to push for a new vote without Lukashenko, whose 12-year-rule has been denounced in the West as Europe's last dictatorship.

"The state machine is mighty, and it is trying to destroy us," he told a crowd of about 4,000 in Oktyabrskaya Square, where rallies every evening since the election Sunday have swollen the ranks of a core of several hundred protesters maintaining a round-the-clock vigil at a tent camp.

While police have not moved to disperse protesters, they have sought to lower the numbers with a campaign of arrests and harassment similar to the conduct Western nations say made the election wildly unfair.

The human rights center Vyasna said that 150 people have been detained in connection with the protests against the election, some of them released but others tried and sentenced usually to a week or two behind bars, reports AP.

According to Independent Online, in a protest unprecedented in the tightly controlled ex-Soviet state on Wednesday, opposition demonstrators continued an overnight vigil and camped in driving sleet on a Minsk central square to back a call for a rerun of a vote they say was rigged.

Lukashenko, 12 years in power and criticised by the opposition and the West for his authoritarian, Soviet-style rule, swept back into office on Monday with an official tally of 82,6 percent of the votes.

Nearest rival Alexander Milinkevich, with 6 percent, called the poll fraudulent, a view shared widely in the West, though the result was never in doubt given Lukashenko's control over much of public life and the media. Milinkevich told protesters: "We must stay here permanently. We must stay here until the victory."

Court hearings against some opposition activists detained earlier have opened in Minsk.

Opposition and human rights activists said police had detained more than 108 protesters, including key opposition figures and journalists, since the start of protests against Lukashenko's re-election.