Some of the heaviest recent fighting in the Somalia capital broke out Wednesday, pitting an Islamic militia against forces that have challenged clerics' growing power. 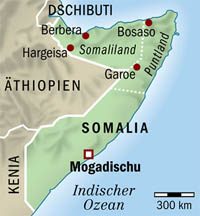 At least five combatants died while receiving treatment for their wounds at the Medina Hospital, said Dr. Abdi Ibrahim Jiya.

More than 27 militiamen and civilians, including a three-month-old boy, were wounded in the clashes in northern Mogadishu, said Dr. Sheikhdon Salad Elmi of the hospital and a Red Cross worker at the Keysaney Hospital who spoke under agency rules requiring anonymity.

Islamic militiamen, wearing civilian clothing and hiding their weapons, traveled in public buses to a checkpoint in a residential neighborhood controlled by a member of a new alliance of warlords and armed businessmen, jumped out of the vehicles and seized control of three trucks mounted with machine guns there, witness Bashir Jumaleh said.

Both sides then brought in reinforcements, said Jumaleh who watched the fighting from a nearby kiosk.

The two sides used rocket-propelled grenades, anti-aircraft guns, machine guns, assault rifles and hand grenades. Dozens of people fled their homes. There was fear that fighting might spread to other parts of the city.

Somalia has been without an effective central government since 1991, when warlords overthrew the government and then began fighting each other.

Fundamentalist Islamic clerics have increasingly sought to set themselves up as an alternative to the clan-based fiefdoms and the transitional federal government that is struggling to assert its authority.

The businessmen and warlords formed their alliance last month, describing the fundamentalist clerics as terrorists and accusing them of killing moderate intellectuals, Muslim scholars and former military officials in a string of unexplained murders, reports the AP.