Serbia-Montenegro's foreign minister planned talks in Ukraine on Wednesday aimed at expanding cooperation between the two Slavic nations, Ukraine 's Foreign Ministry said. Vuk Draskovic was scheduled to meet with his Ukrainian counterpart, Borys Tarasiuk, after laying flowers at a memorial to Ukrainian victims of a Soviet-engineered famine. 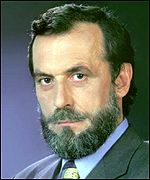 President Viktor Yushchenko, who met with Draskovic on Tuesday, said that he is pleased with the level of trade and humanitarian links between the two nations, but called on both governments to speed up work on an intergovernmental commission on boosting relations.

Yushchenko's office said plans that are under way call for holding days of Serbian culture in Ukraine , and increasing student exchange programs. Draskovic also noted that Ukraine and Serbia-Montenegro share much in common in their aspirations to join the European Union. Serbia-Montenegro is currently in negotiations with the EU about joining the bloc.

However, the EU has warned that if Belgrade does not hand over Gen. Ratko Mladic to the U.N. war crimes tribunal in The Hague by March 31, it would suspend talks. Mladic, the wartime Bosnian Serb army commander, was indicted by the U.N. tribunal in 1995 for the massacre of some 8,000 Bosnian Muslim men and boys in Srebrenica and for a three-year siege by his troops of Sarajevo , the Bosnian capital. The most wanted war crimes fugitive is believed to be hiding in Serbia under the protection of hard-liners in the military. The European Union, meanwhile, has urged Ukraine to concentrate on internal reforms before it makes a formal bid for membership, reports the AP.